Andy Hall, BHIB’s cyber Specialist, reflects on 2017 and looks ahead to what may be in store for 2018:

“2017 was hailed In the cyber security world as one the most notable for the escalation of cyber-attacks, it’s left everyone wondering what will happen in 2018?

Businesses had every reason to be concerned about the rising threat in 2017.   Rarely a week went by without a data breach or cyber-crime story hitting the headlines.   Everyone could be a victim, businesses of all sizes, individuals, charities and local councils are examples of those who were targeted, proving the risk is real, and no one is immune. There are lots of different statistics available but the headline figures show that cyber-attacks have risen drastically in the last 12 months.  From attending regular forums run by Police cyber-crime units, the key message is clear. Cyber-crime in now growing by an astronomical amount.  It is estimated over half of reported crimes are cyber-crimes with more than 700 occurring every day. ”

Andy then considers the forms that cyber attacks can take:

“Ransomware was reported to be one of the most common cyber-attacks, accounting for 17 per cent of all security breaches in the United Kingdom in 2017.   This is pretty nasty stuff if it infiltrates your computer system. It can take days to restore systems leaving you without your systems and critical data. We have all heard of `WannaCry` which spread to more than 150 countries in a worldwide attack with the United States potentially looking to blame North Korea. Other noticeable attacks were Petya & NotPetya.

Human Error also posed a significant threat. Remember it is not just cyber-criminals on the outside whose pose the main threat, it is your own employees on the inside who are also a significant threat.     Employee error to unwittingly give away credentials and other sensitive information facilitate data breaches in over half of data breaches according to recent reports by the ICO.

Phishing or spear phishing are highly targeted attacks using previous research collected on social media or Information in the public domain with the intent to steal Money. There are various examples of smaller businesses being tricked into paying fake invoices of between £20,000 – £100,000 which is a huge amount being taken from a company’s bottom line.

These Scenarios were once solely the province of fiction writers, and are now anything but fiction in the cyber Security world.  That I guess was the very important lesson of the past year.”

GDPR – The new data protection rules become effective on 25th May 2018 and businesses will need to make improvements to the way data is stored, collected, and disclosed as well as keeping the Data secure.   There are potential regulatory fines of up to 4% of worldwide turnover or EUR 20,000,000 whichever is higher if there is a potential breach of rules.    An interesting fact is that had the GDPR been applied to ICOs 2016 fines the total amount under GDPR in 2018 would have been a staggering £69 MILLION  Rather than a mere £880,500 !

Political uncertainty – The issue of political interference for example the US Election has also marked a shift in understanding that cyber is not always just about cyber. We may start to see foreign government sponsored attacks on critical infrastructure such as telecoms, airports and power stations.   Could cyber-attacks cause major disruption such as the catastrophic British Airways power failure did last May?

Cyber-attacks are now becoming an important part of the Government defence and foreign policies with increased resources now being ploughed into the National cyber Security Centre and UK defence systems.

In short, expect the unexpected in 2018!

You can learn more by speaking to your usual BHIB Contact, or alternatively for advice, guidance and more, you can contact Andy Hall, cyber specialist, at ahall@bhibinsurance.co.uk or call (0116) 2819152.

*External links are provided as is and are not an endorsement of source or content. 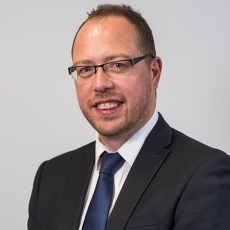 Andy has over 25 years’ experience within the Industry and joined us back in in 2012 having previously worked in both broking and underwriting.

Andy is our Cyber specialist who fully understands issues facing our clients in this area, and who has been an active member at a number of local Cybercrime initiatives.

Away from the office Andy enjoys spending time with his wife & children, cooking, travelling, walking and cycling.   He is also a member of CAMRA and enjoys sampling good quality real ales & cider, having also experimented with some of his own “home brews”!